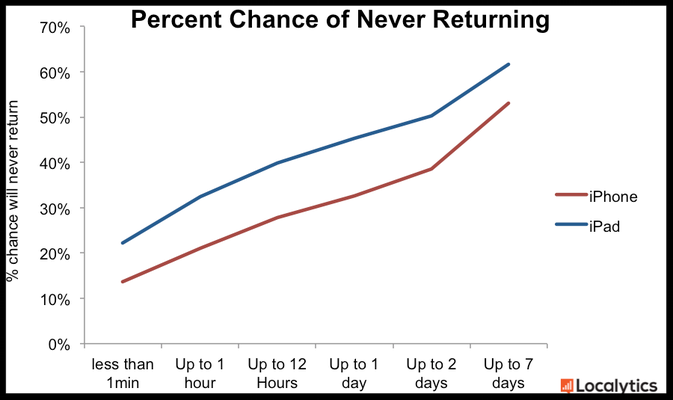 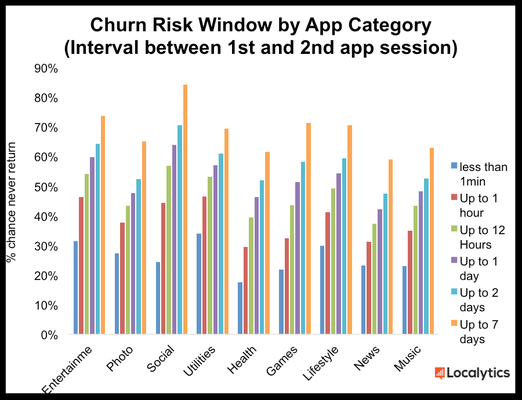 With more than 30 downloaded apps on the average American’s smartphone- plus some preloaded ones – apps face a lot of competition for screen-time. We’ve previously reported that 22% of users only ever open an app once, while 34% of users open an app 11+ times. For marketers, it’s important to quickly identify the one-shot users, and bring them back into the app—before they’re gone for good.

But how can you identify which users will stick around, and which are just passing through? The answer is in the time interval between a user’s first and second session.

In examining global iOS (iPad and iPhone) app usage, the median user returns within just under 6 hours of his first app usage. However if a user doesn’t launch an app for a second time within one day from first use, there is a 40% chance that their first session will also be their last. This “churn risk window”, increases over time – when the interval between the first and second session approaches 7 days, there is a 60% chance that a user will never return, i.e. churn.

For certain categories, marketers must react even more quickly to re-engage users before they’re lost. In Social and Entertainment apps, the data shows that if a user doesn’t try the app again within 12 hours of their first launch, there is greater than a 50% chance they will never open it again.